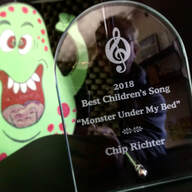 Columbiana, Ohio January 7, 2019: Chip Richter of Columbiana, Ohio was recently awarded “Best Children’s Song” for his song “Monster Under My Bed” by The Ohio Music Awards. This is Chip’s third year in a row to be recognized by the Ohio Music Awards for his music for kids and families. His songs “Let’s Dance” and “Jammy Day” received Best Children’s Song Award in 2016 and 2017 respectively. Other notable recognitions include being named Best Children’s Musician by Lake Erie Living Magazine “Best Of” Issue and a Parents’ Choice Award for his CD “The Dream Tree”
Chip is a veteran family entertainer writing, producing and performing music for kids and families for more than 20 years. Chip says, “I’ve come to a place in my career now where I’m starting to see young parents who grew up listening to my music now coming back to my shows with their own kids. That’s kind of crazy to me… but also very cool at the same time.”
You can find Chip performing at Schools, Churches, Libraries and Family Friendly Festivals such as St Paul’s Catholic School in Salem, Ohio and Heartland Christian School in Columbiana where he’s schedule to appear later this month.
The Ohio Music Awards is committed to celebrating and recognizing the rich and diverse music of Ohio’s artists by awarding Best of Ohio Music Awards in a variety of genres. The Ohio Music Awards are open to Ohio artists whose original recordings are either recorded, produced or mixed primarily within the state of Ohio.
Chip Richter’s Website: www.chiprichter.com
The Ohio Music Awards Website: www.ohiomusicawards.com

Download File
This page has been created to share press releases with media outlets concerning news about Chip Richter's music, upcoming projects, new releases and tours. Feel free to copy or download any info here. Also Chip is available for interviews in person, skype or telephone. To schedule an interview Click Here